Large game project at BTH where I was responsible for the entire animation pipeline. Including character creation, rigging, animating some of the characters and the animation system within the game itself.

Beyond animation playback and state machine blending the animation system also has several other features such as:

The repo for the game can be found here: https://gitlab.com/ssp2018/unbound/tree/master/src/gmp

A game made over the course of a few months by a team of six students during our third year at BTH. The task was to create a game from scratch, including the engine. The game is built using C++ and OpenGL. I primarily worked on the OpenGL rendering side and created most of the art present with Maya. 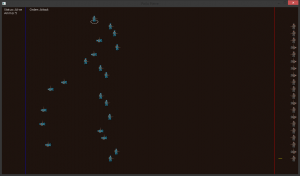 A simple game made in my first year at BTH using C++ and SFML. Poilu Pierre is a WW1 game where the player takes on the role of the titular Poilu Pierre, commanding a French regiment to victory against the Germans.

My project for the Machine Learning course that I took at BTH. My goal was to create a neural network that could learn to drive a car without using any external libraries. The project was built using Unreal Engine 4. They aren’t super smart but considering this was my first foray into machine learning, I’m pretty happy.